Logistic Functions and their graphs

Let a, b, c and k be positive constants with 0<b<1. A logistic  growth function in x is a function that can be written in the form,

where constant C is limit to growth and is also called carrying capacity.

If b>1 or k<1  then these formulas yield logistic decay functions.

Unless otherwise stated , all logistic functions are taken as logistic growth functions.

If we set a=c=k=1 then we obtain basic logistic function as, 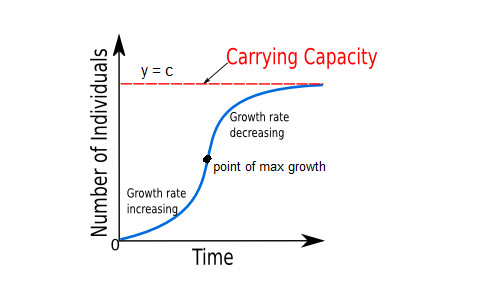 Following are the properties of logistic function graph:

Solution: Comparing the given function with

Using the above information we can draw the graph manually.

Example2: The number of students infected with flu at Springfield High School after t days is modeled by the function

(a) What was the initial number of infected students?

(b) When will the number of infected students be 200?

(c) The school will close when 300 of the 800-student body  are infected. When will the school close?

Solution: To find initial number of infected students at the end of first day , we plugin  t=0.

So 16 students were infected initially.

School will close after 17 days.

3.   Using 20th-century U.S. census data, the population of Ohio can be modeled by