Right triangle trigonometry is used to find height and distances of various objects without actually measuring them. Before moving to this topic, first we need to understand the terms Angle of Elevation  and Angle of Depression.

Before moving to applications of right triangle trigonometry we should know how to convert degree minutes and seconds into decimal degrees.

Example1. To measure the height of a cloud, you place a bright searchlight directly below the cloud and shine the beam straight up. From a point 100 ft away from the searchlight, you measure the angle of elevation of the cloud to be 83°12’ . How high is the cloud? 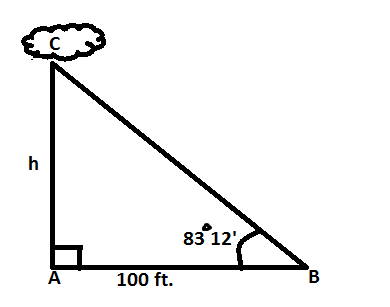 Lets assume h as  height of cloud  C from search light A. 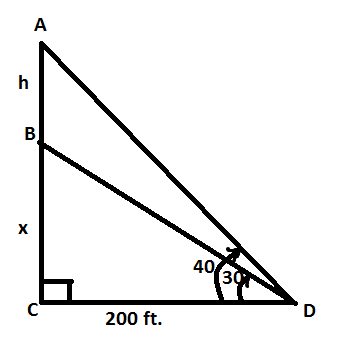 In the figure drawn above AB is the observation deck with height as h, which we need to find.

Example3. The angles of elevation of the top of a tower from two points at a distance of 4m and 9m from the base of the tower and in the same straight line are complementary. Find the height of tower. 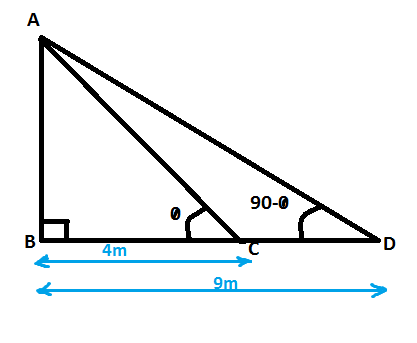 In the figure drawn above AB is the tower and C, D are the points at 4m and 9m from the base of tower.

As the angles are complementary, so one angle is θ and other angle is 90-θ.

Multiplying both the equations we get,

As the  height can’t be negative , so dropping negative sign we get height of tower as 6m.

In the figure drawn below AB is the building of height 7 m and CE is the tower whose height we need to find. 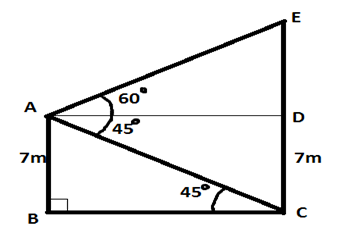 Solution: The figure drawn below models the situation.

Assuming AB a transversal line that cuts two parallel lines , we get alternate interior angle same as 65  and 25 is the supplement angle of 155. Consequently we get < ABC =90°  and AC is the hypotenuse of right triangle ABC. 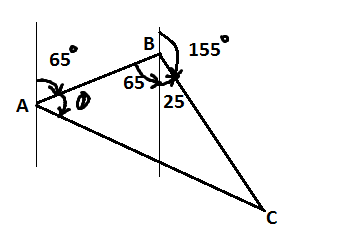 Solution: The figure drawn below models the given situation. 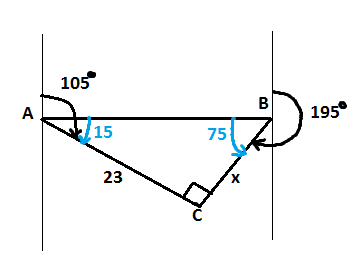 Since the time travelled is same for both the boats  so distances travelled would also be in same ratio as their speeds.