Example1. Use dot product to find length of vector u= 〈4,-3〉

Solution: From property of dot product we have

By the definition of dot product we have,

The vectors u and v are orthogonal if  and only  if

Example3. Determine whether u and v are orthogonal, parallel, or neither.

a) Rewriting vector v, we get

Vector v is a scalar multiple of vector u. That shows both vectors are parallel.

As the dot product is 0, so both vectors are orthogonal.

Projecting one vector onto other

Example4. Find the vector projection of u onto v. Then write u  as a sum of two orthogonal vectors, one of which is

Example 5. Ojemba is sitting on a sled on the side of a hill inclined at 60° . The combined weight of Ojemba and the sled is 160 pounds. What is the magnitude of the force required for Mandisa to keep the sled from sliding down the hill?

And side of hill is represented by vector v making angle 60 with horizontal as show below. 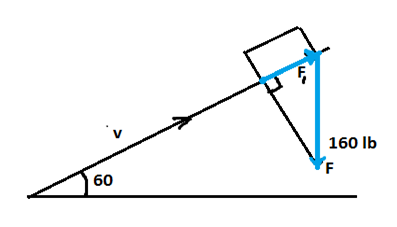 The force(F1 ) required to keep the sled from sliding down the hill is actually the  projection of vector F in vector v. 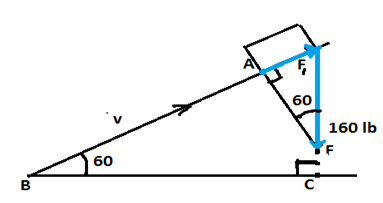 (a) Find the magnitude of the force required to keep the car from rolling down the hill.

(b) Find the force perpendicular to the street.

Weight of car 2000 pounds acting downwards is represented by vector F. This vector is resolved in two components. One F2  is acting along inclined plane  and other F1 is acting perpendicular to inclined plane .

a)  Magnitude of the force required to keep the car from rolling down the hill is given by F2 which can also be found by projection of F onto v.

Since F2   is parallel to FF1  so we find it using right triangle FF1A ,

b)  Force perpendicular to street (AF1) 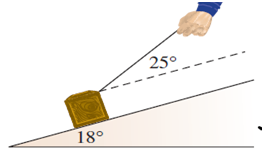 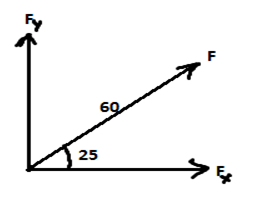 If constant force F is not directed along line of motion, then work done is given by

The work done W by a constant force F as its point of application moves along the vector AB is given by either of the following.

Example9. The angle between a 75-pound force F and

Solution; Here force is not directed along line of motion but it is acting at an angle of  60°  with

so we use formula

We are given distance =3 ft. along the line y= (1/2)x so we can find the other point (x,y) using distance formula.

The force of magnitude 30 pounds acting in the direction 〈2,2〉

Now we need to find angle between force and distance vectors. 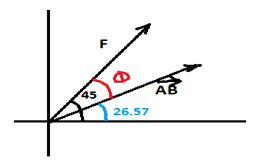 Angle made by vector F

Angle made by distance vector

Angle between vectors F and