Graphs of other Trigonometric functions

Tan(x) being an odd function is symmetric with respect to origin.

We know from the identity  tanx = sinx/cosx

where n is an integer.

Sketching  the graph of tangent functions y= atan(bx-c)is similar to sketching the graph of  y=asin(bx-c) where we locate key points , vertical asymptotes and x intercepts. Two consecutive asymptotes are found  by solving equations,

Similarly cotx = cosx/sinx  so this would be undefined  where sinx is 0. As sinx is 0 at each multiple of  π so cotx has vertical asymptotes  at nπ  where n is an integer.

Two consecutive vertical asymptotes of the graph of

Here is a summary of all properties of tan and cot functions.

Solution: By solving the equations,

We see that two consecutive vertical asymptotes occur at -π/4   and  π/4. Between these two points we find mid point  which is x intercept  and one point each between asymptote and x intercept as shown in table. 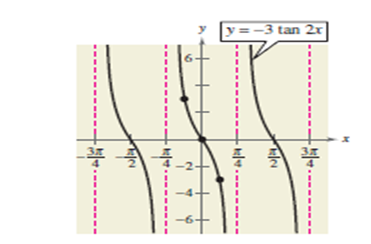 We observe that graph of y=-3tan(2x) decrease between each consecutive vertical asymptotes because here amplitude a(-3)<0.In other words graph for a<0 is a reflection in the x axis of graph for a>0.

Graphs of reciprocal functions(Secant and Cosecant) :

Graphs of Secant and Cosecant can be obtained from sine and cosine using  reciprocal identities.

Here is a summary of all the properties of both reciprocal functions.

Lets work on a few examples to understand its working better.

Example3. Find the vertical asymptotes and sketch the graph of

By solving the equations,

we get vertical asymptotes as      etc.

which are the zeros of sin(x+π/4) . Divide the space between two vertical asymptotes using five key points and get following table of values. We get values of 2sin(x+π/4)  as well as 2Csc(x+π/4 ) to understand  how they are related with each other.

Plotting these points of both functions on same grid we get the following graph. 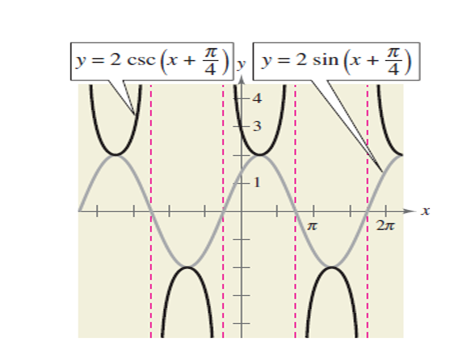 Check : Draw these graphs manually using the process as explained above and then check them using graphing calculator. You can use many graphing tools available online.