All about Vectors in Plane

Vectors in the Plane

A two dimensional vector V, is an ordered pair of real numbers, denoted in component form as <a,b>. The numbers a and b are the components of the vector v. The standard representation of the vector <a, b> is the arrow from the origin to the point (a, b) as shown below .

Here origin O is the initial point and  (a,b) is the terminal point.

Vector v is given as terminal point  minus original point.

Solution: Here we have the components a=3 and b=-4 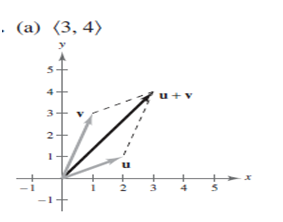 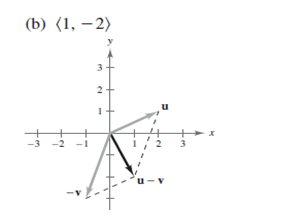 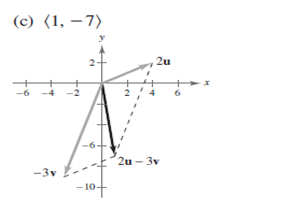 let v be any non zero vector then its unit vector ‘u’  is given as,

The vector u is called unit vector in the direction of v because its magnitude is always  unity(1).

Example3. Find a unit vector in the direction of given vector  v = -i-2j.  Write your answer in

a) component form   b)  linear combination of I and j.

Resolving the vector in components

If vector v has direction angle θ,  then components of v can be found using this formula

Example4. An airplane is flying on a bearing of 335°  at 530 mph. Find the component form of the velocity of the airplane.

Solution: Bearing is always measured from North (positive y axis)  and Direction angle is measured from positive x axis as shown in figure given below.

So velocity vector is given as

(a) Find the component form of the velocity of the airplane.

(b) Find the actual ground speed and direction of the plane.

Lets first sketch a diagram to represent the given situation.

a)   Resolving airplane velocity in components we get,

b)  Resolving wind velocity in components we get,

Resultant vector v is given as, 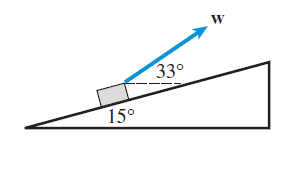 Solution: Force w is making angle 33-15=18°  with the inclined plane. So w is written in component form as,

But horizontal component parallel to inclined plane is given 2.5lb.

Example7. Juana and Diego Gonzales, ages six and four respectively, own a strong and stubborn puppy named Corporal. It is so hard to take Corporal for a walk that they devise a scheme to use two leashes. If Juana and Diego pull with forces of 23 lb and 27 lb at the angles shown in the figure, how hard is Corporal pulling if the puppy holds the children at a  standstill? 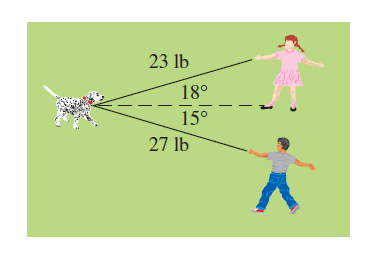 So, Corporal must be pulling with an equal force in opposite direction which is given as, 〈-47.95, -0.12〉

Magnitude of corporal force is given as

Example8. A ship is heading due north at 12 mph. The current is flowing southwest at 4 mph. Find the actual bearing and speed of the ship. 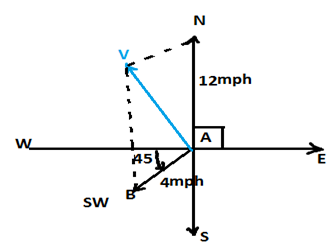