What is Logistic Differential Equation(LDE)

An exponential growth and decay model  is the simplest model which fails to take into account such constraints that prevent indefinite growth but logistic function is more realistic  model that includes other factors effecting population growth.

i) Growth parameter (growth rate)k: This parameter   plays a role similar to that of r in exponential differential equation.

Let M represent the carrying capacity for a particular organism in a given environment, and let k be a real number that represents the growth rate. The function p(t) represents the population of this organism as a function of time t and the constant   represents  the initial population (population at time t=0). Then the Logistic Differential equation is ,

A solution to this Logistic Differential equation is given as,

Example1: Suppose that a population develops according to logistic differential equation

where t is measured in weeks.

a) What is its carrying capacity and find value of k.

Answer: First we need to rewrite the equation as,

Comparing it with Logistic differential equation we get,

b) Draw the direction field  for this logistic equation  and answer the questions. 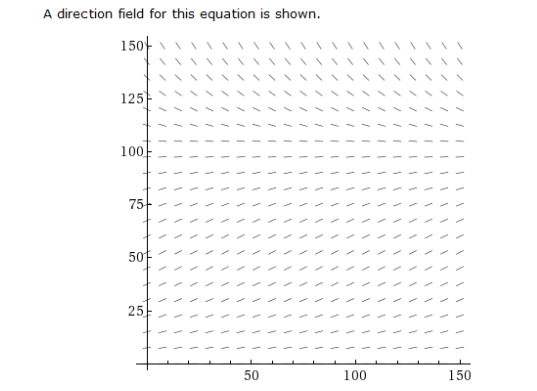 Where are the slopes close to 0?

Answer: To get the points where slopes are 0 , we set dp/dt=0 and solve the equation for p.

Where are they largest?

Answer: Slopes are largest  at  p=M/2

Which solutions are increasing?

Answer: Solutions are increasing when dp/dt >0

So the solutions are increasing from 0 to 100

Which solutions are decreasing?

All solutions  are decreasing  when p>100

Which solutions have  inflection points? At which population lever do they occur?

What are the equilibrium solutions?

Example2: The Pacific halibut fishery has been modeled by the differential equation

kg, find  the  biomass  a year later. (Round the answer to two decimal places)

Solution:  First we find A

Solution to the LDE is given as,

b) How long it will take for the biomass to reach

.(Round the answer to two decimal places)

Example3: Suppose that a population grows according to a logistic model with carrying capacity 6000and k=0.0015 per year.

a) Write the logistic differential equation for this model.

Solution:  Logistic  differential equation  formula is given as,

Solution: Solution to LDE is given as

So the formula for population after t years is given as,

And the population after 50 years  is,

Example4: The population of wild pigs outside a small  town is modeled by the function

where t is measured in months.

b) What is the initial population of pigs?

c) When does the population reach 60 pigs?

where t is measured in weeks.

a) What is its carrying capacity and find value of k.

b) Draw the direction field  for this logistic equation  and answer the questions.

Which solutions are increasing and which are decreasing?

Which solutions have  inflection points? At which population lever do they occur?

What are the equilibrium solutions?

2. A population is modeled by the differential equation

4. Suppose that a particular population of bacteria follows the logistic formula

Where P is in mg and t in hours.

b) Find the differential equation that p(t) solves.