Calculating mass of one dimensional object:

Lets consider a rod thin enough to be treated as one dimensional object, oriented along x axis over the interval [a,b]. Let ρ(x) denote the linear density function, then total mass of rod is given by,

Example1: Find the total mass of a 1 m rod whose linear density function is

Solution: Plugin the values into the formula above,

Mass of a two dimensional object:

Example2: The radial density function for a city’s population( in thousands of people per square mile) is

.How many people live within 5 miles  of the city’s center?

Solution:  Plugin the radial density function into the formula above and we get total Population as,

Now we solve this integral using u substitution,

and the limits get converted as,

Work is said to be done if a force F , working on an object displaces the body through some distance dx. Let F(x)  represents  the force at point x, then the work done over the  interval [a,b] is given as,

Springs : Hooke’s law states that  force required to stretch or compress a spring x units from its natural length is  F= kx  where k is known as spring constant.

Example4: It takes 100J of work to stretch a spring 0.5m from its equilibrium position. How much work is needed to stretch it an additional 0.75 m ?

We used first approach in springs. We use second approach for cables as clear in the next example.

Example4:A uniform cable 20 ft. long hangs from the top of a tall building. If the cable weights 3 pounds per foot, find the work done in raising the entire cable to the top.

Solution: Here weight of cable is the force exerted by the cable,  so F=3 lb/ft

Lets assume cable is raised to a distance of y ft.

Then work done in raising the entire cable

Example5:Determine the work done in propelling a 5  tons satellite to a height of

Solution: Because the weight of body varies  inversely  as the square of its distance from center of earth, force exerted by gravity is given as,

a) The work done in propelling 100 miles above the earth

b) Work done in propelling 300 miles above the earth

The method of slicing the object into small pieces and moving each piece all the way to the top applies very nicely to situations where water or any liquid is being pumped from a tank. The work integral  so obtained will depend on the shape and geometry of  slices that occur in each problem.

Example6: A cylindrical tank of height 10 m and radius 5 m is filled to a height of 8 m with water, which weighs 9800N per cubic meter. Find the work done  to pump all the water from the tank. 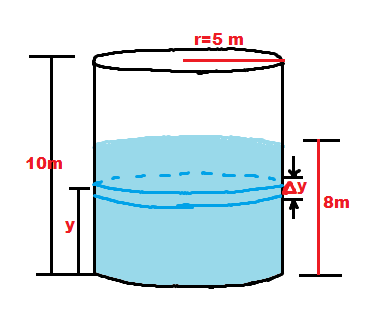 Lets first consider a slice of thickness Δy at a height y. Since this slice is in the form of a disk with thickness Δy, so its volume is given as

Total work done to pump all the water

Example7:A spherical tank of radius 8 feet is half full of oil that weighs 50 pounds per cubic foot. Find the work required to pump oil out through a hole in the top of the tank. 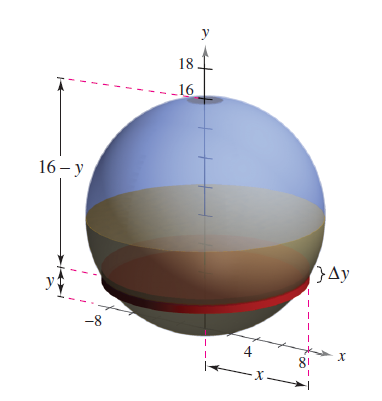 Solution: Lets assume oil in spherical tank is to be subdivided into slices of thickness Δy and radius x. These slices are disks, so volume of each disk is

Here radius x is variable so we need to get it as a function of y. This sphere can be though of a circle  with radius 8 and center at (0,8)

Distance moved by the slice=16-y

Work done in moving  the disk through a distance  of 16-y,

Work done in pumping out oil from the tank

Example8: A water trough has a semicircular cross section with a radius of 0.25 m and a length of 3 m. How much work is required to pump the water out of the trough when it is full? 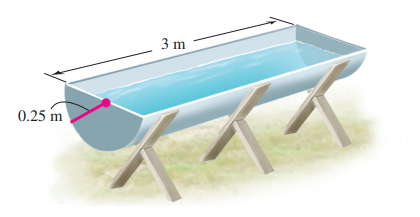 Solution: Lets consider water in semicircular trough is subdivided into slices of thickness Δy. These slices  are in the form of rectangular cross sections having length as 3m. Assuming the center of semicircle as origin(0,0) , width of each slice is given as 2x where x is the distance of semicircular edges from central line.

Equation of the semicircle is

Considering each slice start at height y and exit the trough at 0, then distance moved by the slice is =0-y

Total work done in pumping out water from trough

We get the new integral as,

1.It takes 100 J of work to stretch a spring 0:5 m from its equilibrium position. How much work is needed to stretch it an additional 0.75 m?

2.A space module weighs 15 metric tons on the surface of Earth. How much work is done in propelling the module to a height of 800 miles above Earth,  (Use 4000 miles as the radius of Earth. Do not consider the effect of air resistance or the weight of the propellant.)

3.A water tank is shaped like an inverted cone with height 6 m and base radius 1.5 m. If the tank is full, how much work is required to pump the water to the level of the top of the tank and out of the tank?

5. A 60-m long, 9.4 mm diameter rope hangs freely from a ledge. The linear density of the rope is 55g/m. How much work is needed to lift the entire rope to the ledge?